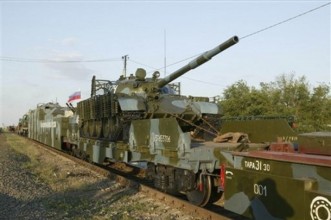 Some time ago Russian Foreign Minister paid an official visit to Abkhazia for opening new embassy building. The building quite a big one is. Such a grand construction looks inadequately at the destroyed urban background of Sokhumi. Such action was a message to the world: "I will stay here forever!" Looks like they did this in turn for construction of new biggest USA's embassy in Tbilisi in Dighomi district, when Americans tell - "We are here and are not going to go!"

Sergey Lavrov was met at the Airport by President himself. At the joint press conference Russian diplomat declared, that Moscow passed to the Abkhazian party a project of agreement for "Dual citizenship". The document stipulated the dual citizenship (Russian-Abkhazian) not only for Abkhazian citizens, but as well for any Russian, who are willing to settle in Abkhazia and purchase a real estate. Sokhumi was strongly against such move up to today.

Naturally, Tbilisi has had expectations that Abkhazian side will fail the agreement using any tricks, to not to allow local property for sale. Tbilisi expected that "allies" will clash with each-other on this ground. After this Moscow will impose sanctions, and close borders banning Abkhazian export, but expectations appeared to be overestimated.

Many times before, Abkhazians were not afraid to fail negotiations for signing a ‘framework agreement" that touched sale of real estate. They also refused to pass the "Mussera" constructed in Soviet period to Vladimir Putin as a Presidential villa. However, this was not followed by any serious irritation from Russia. Moscow was not willing to confront with Abkhazia openly. This is not favorable for Putin in many aspects, moreover he still has many undecided questions in Ukraine. For sake of good PR Russians are refraining from harsh decisions. That's why we should not expect any confrontation between Moscow and Abkhazia.

Segey Lavrov diplomatically responded to the question about restoration of railway with Armenia. "Russia has no problems for restoration of railway, everything depends on the country where it is to pass through." This means on Georgian party. Abkhazia and Armenia are for such decision undoubtedly. "But Georgia disagrees with such decision." But why Georgia will disagree? Abashidze and Karasin already deliberated (using a Saakashvili's signed document in 2011) on the "Trade corridor".

That's because the Abkhazian party demands to sign not a bilateral but three-party document: Russian-Georgian-Abkhazian for restoration of railway. Naturally, the official Tbilisi will not agree to this in no way, as far this would be a recognition of independence of Abkhazia. At the same time in the 2011 agreement there were not terms: ‘Abkhazia" and "South Ossetia". When this document was signed, Russia reconciled with such wording, as soon Moscow needed a green light from Sakashvili's Tbilisi for WTO membership. Deriving from this Moscow has to make Abkhazia agree for opening a "trade corridors" without participation of Abkhazia as an independent subject. In such case the official Tbilisi definitely agree to open the railway.

But in fact the following happens, Being in Sokhumi (according to Abkhazian media), Lavrov was told: "Why spoil relations with us (Abkhazians) when we have such a powerful levers against Tbilisi to force them to make a favorable decision for us. We have to make a three-party agreement and exclude Georgia's participation in reconstruction of the railway and ban to transport any Georgian goods. Only Armenians will be allowed to travel to Moscow through Tbilisi with no stop in Georgia."

. . . . . . . . . . . . . . . . . . . . . . . . . . . . . . . . . . . . . .
So, what levers they were talking about?
1. For the several last days Georgian goods were banned too often at Lars check-point. Not totally banned, but it is expected to be so. As far Moscow sends a clear message to Kvirikashvili - we can close the trade.
2. In a few days after Lavrov's visit the Russian company Inter RAO (that was very loyal and ‘attentive' even in 2008 August) unexpectedly made a many million pleading against Georgia to the International Arbitrage, because of Georgian national currencies fail against the USD.
3. The same case happens with the main gas supplier to Georgia KazTransGas that is totally depended on Russia's GazProm. Less likely this a coincidence is.
4. So-called incidents of ‘illegal crossing of borders' became very frequent. Detained Georgians in Abkhazia and South Ossetia are now prosecuted not under the administrative but under criminal law. This denotes a many years of imprisonment.

What has to do Kvirikashvili's government in response? Unfortunately, nothing. Again and again the only hope the West is. But this a very weak hope is, for the lack of resources to impose sanctions against Russia, defending Georgia.

Accordingly many things now are depended on Georgian society and political establishment. We have to understand that the Russian market never was a stable one for us.

Also we have to urge our citizens that crossing borders now will became very dangerous.

We will face very big challenges for the future. Especially after Grigori Karasin will talk with Zurab Abashidze with the language of ultimatums.