Aslan Abashidze s return We remember the past 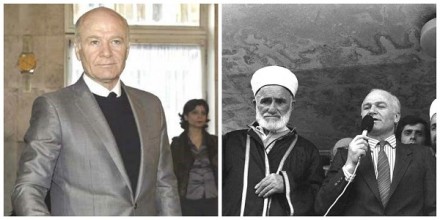 The Batumi Court gave another qualification to a criminal case against former Ajara government head Aslan Abashidze. He was accused in predetermined murder of his own deputy manager Nodar Imnadze. This unexpected decision of the Court was preceded by the notion that Aslan Abashidze in his age of 78 fathered a child.
We can only tell, let's this child be happy. But at the same time an ordinary logics tells us that Aslan has not any ‘plans' in connection with Ajara and moreover with Georgia. However, Aslan Abashidze played quite a big role in the nearest past of Georgia, to quit the politics so quietly and peacefully.
If we follow the legislative logics, this sensational court decision concerning Aslan Abashidze, denotes that the burden of guilt might be totally lifted. In other words, the killing of his deputy in his own Office might be reviewed as a necessary self-defense. Moreover, he has such a strong fact as, Nodar Natadze's invasion into his cabinet. Natadze was first who opened a fire in the Office of back-than Ajara's High Council's chair.
The situation was totally absurd. And this absurd overgrew to the biggest bloody absurd - to the civil war. No ways were left except of the confrontation.
. . . . . . . . . . . . . . . . . . . . . . . . . . . . . . . . . . . . . . . .
However, in the ‘current' history, that we are trying but cannot forget, we have to point out four important moments:
First - one of the UNM ‘patriarchs', Gela Nikoleishvili, former dissident was appointed as a defense lawyer to Aslan Abashidze. He very skilled and clever lawyer is, and most likely Aslan Abashidze will be found not guilty in this criminal case, more over he might be freed from all accusations that Saakashvili's government investigated against him, - in his huge corruptive dealings and misappropriation and wasting of public funds. He was sentenced for such crimes in absentia.

Generally, one of the phenomenal talents of Abashidze was his ability to make close ties with persons from absolutely opposite side. He could cooperate, with ‘Kremlin colonels' like Lebed, Alksnis, and others. He could be in close ties with leaders of different movements despite of its adherence or dislike of Zviad Gamsakhurdia.

Also, he was pretending as if this was not his direct order when, Colonel Kochetkov bombed the Choloki bridge. And when the Ajara Constitution was passed in 2002, that stipulated almost full independence form Georgia; and this was not ‘blessed' by Kremlin. This hideous political ‘movement' around him so mysterious and intellectual is that, we cannot predict any next developments.

The second important moment is that the Batumi Court decision makes an additional ‘head ache' for the current Tbilisi's government. The present government has many new and old undecided cases, and this one makes an additional burden, at the time when Aslan Abashidze was assumed to be left in a political past forever.
Tbilisi government would never take such decision to make an illusion of political reincarnation of Aslan. Such decision would be very dangerous for the Georgian Dream. At the same time, for the reasons that UNM will exploit such failure in its favor.
Very strange is the fact that, the more the Court will became ‘independent', the more unreasonable decisions we will get. This touch the question of judges' appointment policy, that very complicated is. The NGO's ‘team' did everything possible for total independence of Judges' clan, and now we often will be surprised with its ‘independent' decisions in connection (for instance the appointment of Murusidze) and lifting a burden of guilt from Aslan Abashidze.

The Ajara Court gave a notice to Tbilisi, that the ‘case is not as it seems', and it is necessary to take in view the interest of the local elite.

And finally the fourth - indeed everything what happens in Ajara since 1991 is connected with Aslan Abashidze, But the question arises: how he came into the power. How deputy Minister became a head of the High Council of Ajara's Autonomous Republic.

The Case was as following: back then so-called "Round Table" member, the "Traditionalists" pushed him into the power, for the silliest reason that he was a representative (ancestor) of oldest family who ruled the Ajara region for 500 years. Such a ‘clever' advice was given to Zviad Gamsakhurdia, with the false promise that Aslan will annul the autonomy.
First of all the annulment of the autonomy was a total absurd (previously and as well now), as far this autonomy is decided by the international agreement, and Turkey and Russia are involved in it. Moreover, people in Ajara (especially in high mountain region) would never agree to the annulment of the autonomy, and such decision may lead to the civil confrontation. But the main is that the Ajarian elite swiftly recognized Aslan as its own allay, who will make even stronger the autonomy from Tbilisi. And they were not mistaken.

And who will be responsible for such situation? Aslan himself, or those who made a silliest, childish decision on his appointment to this post?

Fortunately, Aslan appeared to be a clever and realistic politician (in May of 2004 he refuse all suggestions from Moscow, except of his evacuation). He understands well the difference between desirable and possible.

The Batumi Court decision in fact - the ‘message' is which Ajarian elites sent to Tbilisi, and it is very dangerous.