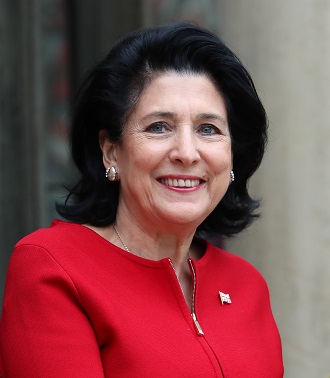 Georgia’s president wants Western countries to do more to face up to Russia and the “very heavy pressure” she says Moscow exerts on her nation as it pursues a “natural road” toward integrating with Europe.

Salome Zurabishvili, who took office as Georgia’s first woman president in December, insisted during an interview in Geneva Monday that Georgia would one day join the European Union and NATO.

“I don’t have the plan of action that brings us there,” Zurabishvili, a former French diplomat who was born in Paris to Georgian parents, said. “But I think that it’s very clear that our road to NATO will end successfully — and to European Union — in different manners, but in parallel ways.”

Zurabishvili also predicted that Georgia would regain South Ossetia and Abkhazia, provinces it lost control of after an August 2008 war with Russia. Moscow recognized the regions as independent states and has a military presence in both.

Zurabishvili calls them “occupied territories.” Russia contends it sent troops into Georgia after Georgia opened an assault on South Ossetia.

“Gradually, I think, the population in the occupied territories, are understanding that the perspective is not in the north (with Russia),” Zurabishvili said.

Zurabishvili, 67, was in Geneva for the International Labor Organization’s centennial that opened Monday. Russian Prime Minister Dmitry Medvedev also was among about two dozen heads of state and government attending the event.

Because Georgia broke off diplomatic ties with Russia after the 2008 conflict — when Medvedev was Russia’s president — Zurabishvili said it was up to Georgia’s allies in the West to press the issue of Georgia’s lingering territorial troubles with Moscow.

“They should talk more about Georgia when they have direct meetings. It should be on the agenda of every meeting with Russia,” she said.

Zurabishvili became a Georgian citizen after serving as France’s ambassador to Georgia and went on to become Georgia’s foreign minister. In February, she met in Paris with French President Emmanuel Macron, who expressed support for Georgia’s territorial integrity.