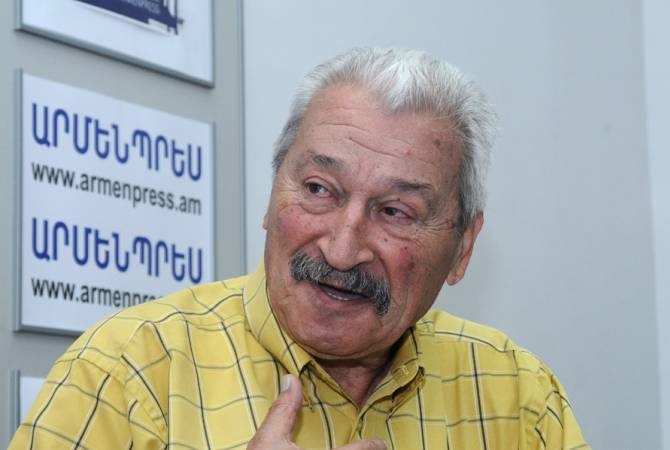 82 years old but still going to work every day and showing up at the office at 8:30. "I was destined to become a journalist," says ARMENPRESS correspondent Levon Azroyan as he celebrates his 82nd birthday today with his colleagues at the office.

"Although in school I dreamt of becoming a military doctor. I even wanted to study at the Leningrad Military Medicine Academy. I suffered food poisoning the day before the exam and I didn't go to the academy. I've never regretted choosing journalism because this has given me the chance to travel frequently. I've been in many countries, at ARMENPRESS I was lucky enough to be the covering correspondent of almost all major events for nearly 20 years. This has given me the chance to personally see almost all leaders since the Soviet Union until now. I must do journalism as long as I am breathing," says Azroyan.

Azroyan, already having 55 years of news media experience, made his first steps in journalism at the Soviet Georgia newspaper headquartered in Tbilisi.

"I remember that day as if it was today. I went to the editorial with my dad. Naturally, he was the first to congratulate me, he said that I am entering a sphere where I must work with selfless devotion, honesty and impartially. Rather obliging words," he said, reminiscing about the early days of his career.

Georgia still has a special place in Azroyan's heart, that's where he was born and raised, where he has many friends, and where his parents are laid to rest.

Earlier in 2019 Azroyan wrote his 11th book in honor of the 100th anniversary of establishment of ARMENPRESS.

"I love ARMENPRESS very much and I consider myself ARMENPRESS's very own from head to toe. I am very happy that my career proceeded at ARMENPRESS, which has left its everlasting trace in the history of Armenian journalism. I remember those days very well when ARMENPRESS was a unique brand -- our agency was providing 70-80 of the print media," Azroyan said.