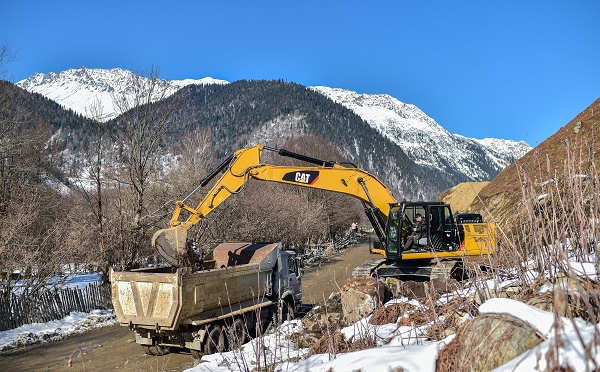 Before moving to the main phase of Nenskra HPP construction, Nenskra Hydro has already invested up to $ 20 million in 2019. This sum has been spent on development of local infrastructure and conducting research and studies.

In addition, in 2019, the company paid 4 million GEL in local budget. This sum is half of the Mestia municipality budget and will be spent on the development of the municipality in 2020.

The main mission of the 280-megawatt Nenskra HPP is ultimately to reduce the deficit that has been raised in recent years, along with the increase in electricity consumption, in Georgia's energy market. Because of this deficit, Georgia is now significantly dependent on imports of electricity from Azerbaijan and Russia. Nenskra HPP will provide Georgia with an additional 1.2 billion kW / h energy.

The year of 2019 was not an easy year for Nenskra Hydro. Since the project was abandoned by the previous EPC Contractor in 2018, a new tender for the selection of new EPC Contractor has been conducted by international standards with transparency, resulting in three bidders. The best offer is selected and one of the best bidders will be named in the near future.

However, these changes have not slowed down the process - preparatory construction work is still underway with the local contractor. 9 bridges and up to 40 km road are being constructed, as well as various infrastructure works. Moving on permanent works with a new EPC Contractor will probably start in summer. It is about the construction of a 120-meter-high dam, a 30km long tunnel, a power house and other auxiliaries. These permanent works will begin in 2020 after award of EPC Contract.

Construction of all major infrastructure will begin in 2020, including the main tunnel, dam foundation, concrete plants and other auxiliaries. The first tunnel bore is planned for the end of 2020, which is one of the most important part of the project.

The most important part of each component of the megaproject is to minimize environmental impact. In this section, Nenskra Hydro involved experienced international organizations and experts from Switzerland, Japan, France and Germany.

Working together with Georgian specialists, a unified document - the Nenskra HPP Project Environmental and Social Environment Impact Assessment (EIA) report has been drafted and approved by MEPA, which is public and can be downloaded and read by anyone. The document describes in detail all environmental risks and measures to minimize them.

What is the cost of electricity generated by HPP?

As for the tariff issue, which has been repeatedly discussed, even critically, the main function of the Nenskra HPP is to replace the import tariff. And it can be manageable throughout the state's involvement and control during the operation stage.

It involves both: construction and operation. The Nenskra HPP project is different from other types of projects. The company has offered the government another flexible mechanism by which the government can adjust tariffs during the project period. As for the impact on consumer tariffs, this would be minimal, which would not outweigh the problem of what is called the country's import dependency - compared to the tariff on imported electricity, tariff of Nenskra will always be competitive.

Nenskra HPP is a source of local generation, consumed for Georgia and will remain in Georgia. Electricity will go out of the country if there is excess generation, otherwise, it will be consumed for demands of Georgia.

Nenskra Hydro implements unprecedented social projects for Chuberi and Nakra valleys. The population of the valleys for many years has been solely concerned with the extraction and sale of timber. Besides, these areas are extremely poor and it is unimaginable to produce so many crops that the family can survive year after year.

With Nenskra Hydro sponsorship, the local outpatient facility has already been rehabilitated in Chuberi. The outpatient clinic is equipped with modern equipment. The renovation and equipping of Chuberi Culture House and Sports Complex is also in the final stage of completion.

Along with infrastructure projects, educational projects are underway. English and computer courses have been started. The project of providing the local population with heavy equipment was implemented. Land registration and recording program was completed. Up to 90% of the land in the Nenskra Valley has already been described and relevant documentation has been prepared for submission to the Public Registry.

An internship program was launched in the end of the last year involving local youth. The program has already completed its first flow. Participants, along with Nenskra Hydro employees, were assigned to various departments in accordance with their interests and had daily contact with the processes of the company.

In addition, the company encourages employing local residents. Currently, 132 locals are employed on the project. They build themselves and see when, by what standards and for what purpose the Nenskra HPP is being built. More than 1,000 jobs will be created as the HPP enters the active phase of construction and priority will be given to locals.

The second phase of the social programs implemented under the project deals with the sustainable development of the valley for which Nenskra Hydro provides creation and development of local SMEs. Special attention will be paid to the development of tourism, which will provide a permanent source of income for the local population. The company is already working on this direction of social programs with local authorities. It is planned to develop different programs, trainings, financial participation. Pilot products are already available.