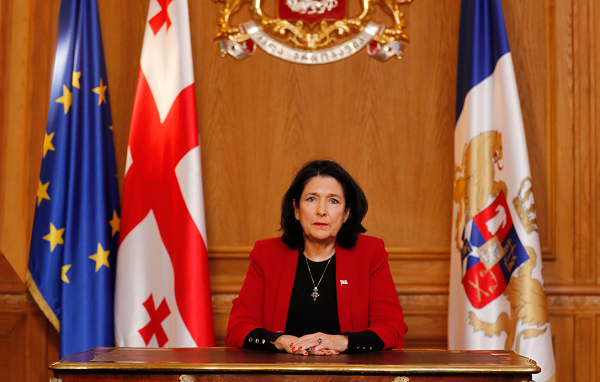 President Salome Zourabichvili, after a submission by the Prime Minister, declared a state of emergency across the entire territory of Georgia.

The President’s address to the nation:

“My dear compatriots, Today, Georgia, along with other countries across the world, faces one of the most serious challenges.

The situation is grave and we should expect it to get even worse. There is no cure for the disease yet. Only prevention is in our hands.

We have all seen in the past few days how the leadership of our health care system, of the Lugar Center, and of the Infectious Disease Hospital have met this challenge in a timely and efficient manner and with great responsibility and professionalism. Thanks to their professional advice and the timely and effective response by state agencies, the speed and extent of the viral outbreak amongst our population were significantly reduced in this first stage.

Thanks to them, the number of people infected in Georgia is still within the range of two digits as of today.

It can be said that we managed to contain the first wave of the epidemic. We can be proud of this as it is the joint achievement of our society, of our state agencies and of our health care system.

We must transform this first success into a victory. Considering the nature of the epidemic, we must be ready for a second wave, during which the number of infected people will increase and the outbreak may take more serious forms.

Hence, in order to prevent the mass spread of the new Coronavirus and due to this rapidly-growing challenge, considering the World Health Organization’s declaration of a pandemic, and to ensure that the State can fulfill its constitutional commitment before society by protecting the life and health of our people, and to mitigate the looming threat, based on the submission of the Prime Minister and in accordance with Article 71 of the Constitution, I have the taken the decision to declare the State of Emergency on the entire territory of Georgia.

This decision shall enter into force immediately.

Also, on the basis of the submission of the Prime Minister of Georgia, in accordance with Article 71 of the Constitution and Article 2 of the Law on State of Emergency, I will issue a decree, according to which some of the rights enshrined in the Constitution of Georgia shall be restricted on the territory of Georgia for the duration of the State of Emergency, including the freedom of movement, of property, of assembly, and of providing public services.

This decree provides for administrative and criminal sanctions for violations of the State of Emergency.

The State of Emergency is in force until April 21.

It should be understood by everyone that the limitation of our constitutional rights derives from the situation we are in.

When imposing restrictions, our democratic principles were taken into account as much as possible and neither freedom of expression, nor speech were restricted, so that media outlets can freely fulfill their obligations and inform the public.

The measures envisaged by the decree include neither full quarantine nor a curfew.

At this new stage of the struggle, responsibility and self-awareness of citizens is essential to the success of the emergency situation and will ensure that we are not obliged to further tighten the measures at a later stage.

I believe that with unity and self-awareness, we will come out victorious.”