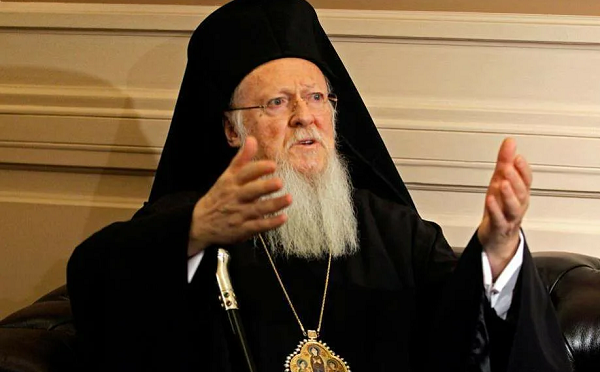 The attention of journalists was attracted by the frank letter of Archbishop Job Gecha to Patriarch Bartholomew of Constantinople. What is so interested in the media that published this document?

The new Metropolitan of Italy, Exarch of Southern Europe of the Patriarchate of Constantinople, Polycarp (Stavropoulos), met with Pope Francis at the end of May, after which he gave an interview in which he announced one of his main missions - to promote ecumenical dialogue between the Orthodox and Catholic Churches. As Vladyka noted, "it was a cordial meeting between his son and his beloved father, a meeting between the bishop and his archbishop and patriarch." And also another example of Phanar's commitment to the idea of ​​unification with Rome.

The Greek Reporter published an article based on a letter from the Permanent Representative of the Ecumenical Patriarchate to the World Council of Churches, Archbishop Job Gecha of Telmis to Patriarch Bartholomew (see the full text of the document in Italian at the link), the news site Cyclades24.gr reported. The GreekReporter reporter praises this letter as a confirmation of the Ecumenical Patriarchate's commitment to restoring Eucharistic unity with Rome.

What in the letter of the Archbishop of Telmis could interest the media, and how his ideas can affect the Orthodox world - this is what Cyclades24.gr explains. From the words of the archbishop, it follows that on Phanarede they really plan to develop an ecumenical dialogue with Roman Catholics and in the future they intend to get closer to Rome. However, the position of the Russian Orthodox Church is the main problem on the way to this goal. Therefore, in order to deprive the ROC of dialogue with the Vatican, it is proposed to address the situation with the granting of autocephaly to the Orthodox Church of Ukraine and to introduce the clergy of the OCU into the Orthodox part of the commission.

As Archbishop Job claims in his letter, it was Metropolitan Hilarion (Alfeyev) of the Russian Orthodox Church who hindered the dialogue between the Orthodox and Catholic Churches from year to year, and asked the Catholics to resolve the issue of communism. It is not excluded that Patriarch Bartholomew and his entourage, for this very reason, have a special dislike for Metropolitan Hilarion.

Meanwhile, Archbishop Job found a way out: the dialogue between Orthodox and Catholics on the issue of union will be replaced by a pre-planned agreement between autocephalists and Uniates in Ukraine.

In addition, Constantinople intends to ignore the positions of the Antiochian, Serbian, Georgian, Bulgarian, Polish Churches, the Church of the Czech Lands and Slovakia, which also do not support a hasty rapprochement with the Catholic Church, justifying this by the fact that they are only “well-known satellites” of the Russian Orthodox Church who blindly follow her in political matters. Thus, if, because of this, representatives of these churches cease to participate in the work of the Orthodox Catholic Commission, then this will play into the hands of Patriarch Bartholomew. He will be able to declare the restoration of communion between the Orthodox and Catholic Churches, especially since he still identifies the Orthodox world only with himself.

What the reunification of Western and Eastern Christianity will cost, if it takes place, is even scary to imagine. Indeed, in the event of annexation, the most important thing for Constantinople is the issue of place and status in the Roman Church, and not the expansion of the Uniates in Ukraine and Romania, and not the dogmatic problems of the Filioque.

It turns out that the rumors circulated by the Phanar hierarchs about the planned unification of the OCU and the Ukrainian Greek Catholic Church are not unfounded. Everything once again suggests that the repeated facts of the joint ministry of hierarchs and clergy of the Orthodox Church of Ukraine and the Uniates is a well-thought-out policy of the OCU, which Phanara knows and approves, and not the arbitrariness of individual representatives of the clergy. In general, there is no doubt that if a bilateral commission is created with the participation of the OCU and the UGCC, which Archbishop Job speaks of, it will be declared that there are no obstacles to unification and joint service.

The Supreme Archbishop of the UGCC Svyatoslav Shevchuk, in contrast to the head of the Church of Constantinople and the hierarchs under his influence, has long and frankly said about the obvious fact: a single “Kiev Church” can only be under the auspices of the Roman bishop. From the revelations of Archbishop Job, it follows that this will not in any way affect the vain and dangerous intentions of Patriarch Bartholomew, who decided to use the OCU as an opportunity for a new union with Rome. Perhaps the OCU was created precisely with these intentions.