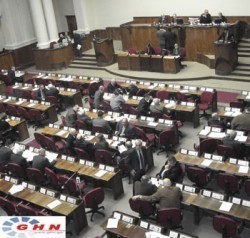 Parliament approved on December 20 with its first hearing draft of new regulations for political party funding, banning legal entities, including business organizations, to finance parties.
The draft of amendments to the law on political parties was analyzed by the Council of Europe's advisory body for legal and constitutional affairs, Venice Commission, which said that new regulations address "many international standards".
In particular the Venice Commission listed among "positive points" ban of corporate donations; introduction of a requirement for bank wire transfers of donations and putting of the state audit agency, Chamber of Control, as a key body in charge of monitoring parties' financial reports and donations.
Political parties will only have the right to receive funding from individual persons in an amount of no more than GEL 60,000 annually from each Georgian citizen, instead of GEL 30,000 as envisaged by the existing law.
The same regulations will apply to parties' election campaign funds - these are funds, which parties open separately and where they receive donations and carry out financial operations required for solely their campaigning during the electoral period.
Although the Venice Commission's recommendations, which were released on December 20, list ban on party funding by legal entities, also including business organizations, among "positive points" of the new regulations, the document also notes about possible negative aspects of such prohibition.
The Venice Commission says that such ban on corporate donations are in place in a number of EU-member states, including France, Poland, Bulgaria with the French model being very influential in Europe over the last decade.
"When combined with significant state financing of political parties, the model aims to decrease the pressure exerted by big business on the political process. It is a legitimate choice for a country to make. However it should be borne in mind that corporate bans may be circumvented in a number of ways, through channelling of corporate money through individual donations (employees of a company, for instance)," the Venice Commission said.
"Also, if there is no adequate level of state subsidies for the political parties, the banning of corporate funding coupled with strict disclosure provisions may create difficulties for the political parties to fundraise," it said.
The Venice Commission recommended "to re-visit the broad prohibition of corporate donations to the party finances."
According to the new regulations a party and its representative or a third person affiliated with a party will be banned from donating money, gifts and "other material benefit", as well selling goods under discount price or procuring goods and services for higher than market price.
Similar restrictions will also apply, according to the new regulations, to legal entities, which are "related, directly or indirectly, to a political party or are otherwise under the control of a political party." The draft defines such potential linkage when a legal entity's "expenses directly or indirectly are related to the activities or goals of a political party."
In respect of this provisions, during the discussions of the regulations at a parliamentary session on December 20, a lawmaker from Christian-Democratic Movement, Levan Vepkhvadze, asked a ruling party lawmaker, Pavle Kublashvili, who presented the draft, how these new regulation would affect to those several thousands of individuals - artists, writers, and other cultural workers, as well as some sportsmen, who were receiving assistance from billionaire-turned-politician Bidzina Ivanishvili's charitable foundation in a form of a monthly salary for years.
"We should separate from each other what is charity and what the political corruption might be," MP Kublashvili responded. "If a person has political goals and does charity for that reason, that's political corruption and bribery; but if this charitable activity has been done without such [politically-motivated intentions] these limitations should not apply in such case. That's my personal opinion and if you wish we can continue [discussions] on this in order to clarify formulations [of the new regulations], but I guess we all agree that in general mixing politics with charitable donations has not had any positive consequences in any country."
In other key provisions, the new regulations set:
• A cap of GEL 1,200 for party membership fee annually from each member;
• Total amount of a party's annual funding should not exceed 0.2% of Georgia's GDP; next year, based on an official forecasted GDP, party's total funding should not be more than GEL 53mln - far more than any party in Georgia has ever reported in donations.
• A party should submit information about donations within 3 days after receiving funds and the state audit agency should then make this information publicly available.
In one more key point, the new regulations ban a political party to take a loan from individual persons or legal entities, other than commercial banks.
The proposal also imposes restrictions on commercial banks, banning them to lend political parties a loan more than GEL 100,000. A single commercial bank can lend money to several political parties, but total amount of these loans should not exceed GEL 100,000 annually (USD 60,000). During the discussions on December 20, ruling party lawmakers indicated that they would consider revising this limit upwards before the draft's approval with its third and final reading.