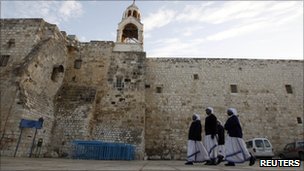 Christian pilgrims and tourists in their thousands have gathered in the West Bank town of Bethlehem to celebrate Christmas.Celebrations culminated in Midnight Mass at the 1,700-year-old Church of the Nativity, built on the spot where it is believed Jesus was born.
Celebrations culminated in Midnight Mass at the 1,700-year-old Church of the Nativity, built on the spot where it is believed Jesus was born.
About 120,000 visitors are in the Palestinian West Bank town, 30% up on last year, officials said.Meanwhile in the Vatican, Pope Benedict XVI celebrated Christmas Eve Mass at St Peter's Basilica.
The Latin Patriarch of Jerusalem, Fuad Twal, travelled from Jerusalem to Bethlehem to lead the Midnight Mass.He passed through the massive gate in the controversial Israeli security barrier that separates Jerusalem from Bethlehem and arrived in Manger Square, where he was greeted with a bagpipe band.
Patriarch Twal, a Palestinian who is a Jordanian citizen, has expressed concern for Christians in the current upheavals in the Middle East and asked them to support the moves towards freedom and democracy.His midnight homily urges "the return of calm and reconciliation in Syria, in Egypt, in Iraq and in North Africa".
It reads: "O Child of Bethlehem, in this New Year, we place in your hands this troubled Middle East and, above all, our youth full of legitimate aspirations, who are frustrated by the economic and political situation, and in search of a better future."
American visitor Irma Goldsmith told Associated Press: "I watch Christmas in Bethlehem each year on TV, but to be here in person is different. To be in the spot where our saviour was born is amazing."Palestinian President Mahmoud Abbas is attending the celebrations.
He said: "I wish for the Palestinian people that next year will be the year of implementing peace in the occupied Palestinian lands."Bethlehem Mayor Victor Batarseh also said he hoped the festivities would bring Palestinians closer to their dream of statehood.
The BBC's Jon Donnison in Bethlehem says although this year has been a momentous one for the Middle East, there has been almost zero progress in terms of peace between the Palestinians and the Israelis.
Once predominantly Christian, two-thirds of Bethlehem's 50,000 residents are now Muslim.Some say the economic restrictions imposed by Israel are the main reason behind the exodus of Christians from the West Bank; others cite persecution by militant Muslims.
Meanwhile in Rome, Pope Benedict lit a candle in his window overlooking St Peter's Square to signify peace.He then celebrated Christmas Eve Mass at 22:00 local time (21:00 GMT), brought forward two hours to spare the 84-year-old pontiff a late night.In his homily he said: "Let us ask the Lord to help us see through the superficial glitter of this season and to discover behind it the child in the stable in Bethlehem."
The BBC's Alan Johnston in Rome says the Pope made his way down the aisle on a gilded, moving platform to cater for his mobility issues.Pope Benedict will deliver his traditional Urbi et Orbi (To the City and the World) speech on Christmas Day.