Georgian Cathalicos Patriarch became a “Person of a year” 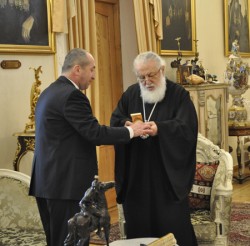 Catholicos-Patriarch of All Georgia, the Archbishop of Mtskheta -Tbilisi and Metropolitan bishop of Abkhazia and Pitsunda, His Holiness and Beatitude Ilia II became in second time a laureate of the annual premium "Golden Parchment", GHN reports.

The prize was delivered to Georgian Patriarch. Director General of news Agency GHN Gocha Mirtskhulava thanked Patriarch for his activity and noted that Catholicos Patriarch is a very authoritative person in Georgian population, and the evidence for this is a fact that under the poll conducted by GCG, Georgian Patriarch was named for the second time a "Person of the year".

"This prize is a symbolic expression of gratefulness from our citizens, "- Gocha Mirtskhulava said.

In turn Ilia Second thanked for the premium "Golden Parchment" and wished a good luck for Georgian population. "God bless you! I am very happy that I serve for our nation. This is my aim and nothing more." - Patriarch said.

Patriarch called all laureates and nominees of the Golden Parchment to make the main aim the care about Georgia and Georgian people. ‘First of all we are Georgians and we have to remember about our homeland. We have to care after our homeland. The famous slogan of St. Ilia Chavchavadze is "Language, Homeland and Belief" I would add to this slogan my own: "God, Homeland and a person".

Patriarch said that we have to take care after the people. "The most important in our life is a homeland and a person. Georgian people have to return from abroad. Georgia should take care after own homeland. Nobody can help us as better as we can help ourselves" - he said.

For information, the ceremony of "Golden Parchment" award is taking place annually in the hall "Bagrationi - 1882" organized by the news agency GHN. .