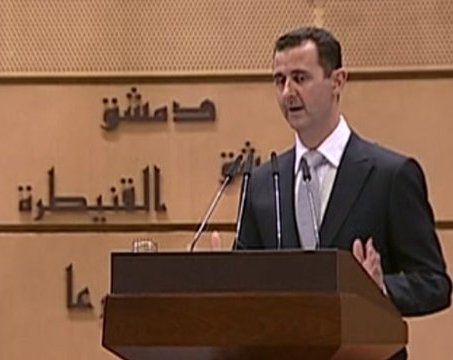 In a rare speech Tuesday, Syrian President Bashar al-Assad blamed the unabated violence in his country on an "external conspiracy."

While he did not explicitly point the finger at a particular country, a defiant al-Assad blamed both Western and Arab elements for the unrest.

"The mask has fallen off these faces," he said. "No wise person denies these international conspiracies that is being done in order to spread fear inside. But this time, it was done with people from inside."

He also took to task international media, accusing some journalists of editing and fabricating his quotes.

"We have more than 60 televisions stations working against Syria," he said.

He reserved the bulk of his criticism for Arab nations for not standing with Syria and for coming down on it for human rights abuses.

"Their situation is like that of a doctor who tells people not to smoke while he has a cigarette in his mouth," he said.

"We have been working for years to create an office to boycott Israel," he said, referring to the Arab League initiative against Syria. "But in weeks they did it against Syria, Are they swapping Israel for Syria?"
Al-Assad's speech came the same day that the U.N. Security Council is expected to meet for the first time this year to discuss the brutal and sustained government crackdown on anti-regime protesters.

The Security Council itself has been under pressure to act on the violence. Amnesty International, which wants human rights groups to be granted access to the country, has urged the Security Council to refer Syria to the International Criminal Court, "impose a comprehensive arms embargo" and "freeze the assets of President al-Assad and others involved in human rights violations."

Reports of bloodshed in Syrian cities escalate virtually every day.

On Monday, 24 people were killed across the country, according to the Local Coordination Committees of Syria, a network of opposition activists. The deaths included 13 in Homs, eight in Idlib, one in a Damascus suburb, one in Deir Ezzor and one in Hama, the group said.

CNN has not been given permission to travel to Homs, where an onslaught of violence has been reported for months. A CNN crew was allowed into the capital, Damascus, after a long period of the Syrian regime refusing the entry of international journalists.

But the crew's equipment for live broadcasting was confiscated on arrival. And a government minder is assigned to the team, though he has not accompanied the team at every turn.

Since Arab Spring demonstrations swept the region early last year, protesters in Syria have demanded a country free of the Assad regime and true democratic elections. Assad has been in power since 2000; his father, Hafez, ruled Syria for three decades.

Thousands have been reported killed by security forces throughout the uprising. Death estimates range from 5,000 to more than 6,000. But the Syrian government has consistently blamed the violence on "terrorists."

Many Syrians mourn the dead while simultaneously denouncing al-Assad.

On Monday, tens of thousands of people turned out to a funeral procession and rally against the president.

At one funeral, crowds chanted, "Overthrow Assad! Overthrow the regime!" They blamed the man's death on government forces.

But at a separate funeral in Damascus, another crowd mourned a man, this time chanting slogans supporting al-Assad and blaming that death on opposition forces.

SANA reported that seven "martyrs" from the army and security forces were buried Monday. It also said a citizen was killed by "an armed terrorist group" in Hama.

Arab League officials are scrambling to end the bloodshed and has pledged to add to its 165 observers already in the country.

The Arab League fact-finding mission in Syria is part of a larger initiative to end security forces' attacks on peaceful protesters.

But the group's mission has been met with skepticism from both pro-Assad supporters, who view the monitors as stooges for regime change, and anti-government activists, who see the observers as weak and ineffective.